Is it art or shooting practice?

In my years of totem making, I've collected glassware that didn't make the cut. What should I do with them? They're still beautiful in their own right. But, they don't fit the criteria for totem-ness. After three years of crafting the crazy garden jewels, I've finally identified what works and what doesn't. 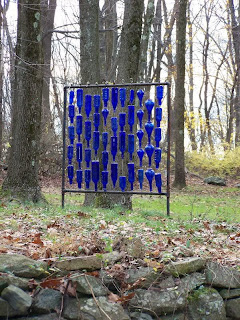 Alas! I saw this fabulous photo on the internet and my inspiration took shape. I began planning the materials. Thankfully, my husband finds some satisfaction in creating something beautiful, so he was in charge of the frame. I began choosing the candidates. 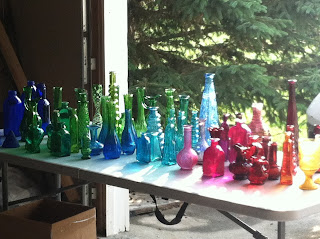 Beautiful, aren't they? The next step was determining their placement. I did this by lining them up on the table and playing with the order of colors and shapes. This became my initial plan (below). 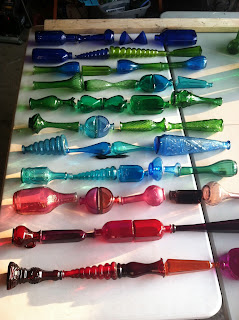 Through the process, several bottles broke, so I did some rearranging of the layout later as I went. We had to drill holes in the bottoms of all the bottles so I first tried drilling them with a hand drill and "diamond bit." However, it took FOREVER to drill one bottle and it was a tense process-- not to mention, highly volatile. :-(  The crappy photo below shows one bottle propped in the drain of the kitchen sink. I was drilling and my daughter was spraying with water. It's imperative that you drill with a water bath because of the heat it generates. 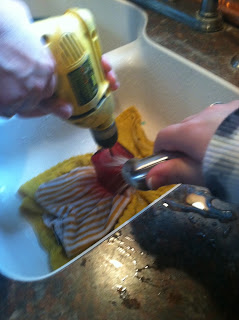 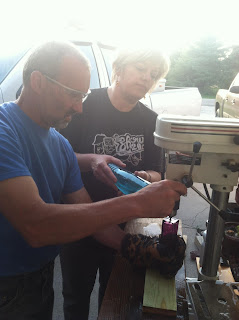 Once the bottles were drilled, it didn't take long. Mark has already built the frame from copper pipe and drilled holes in the top and bottom pipe. We strung the bottle with clothesline cable (it's a plastic coated cable) and spaced each bottle by inserting 3/8" clear plastic tubing between each one.  We strung the cable into the pipe's holes and secured them with cable clamps at the top and bottom. 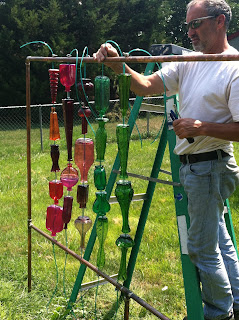 The finished product exceeded my expectations a hundred times. It's absolutely beautiful during every part of the day. 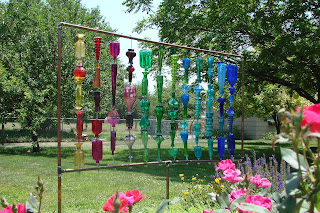 It's even beautiful on an overcast day (photo below). 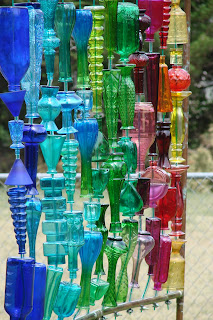 My only fear is that someone may mistake it for shooting practice. :-O 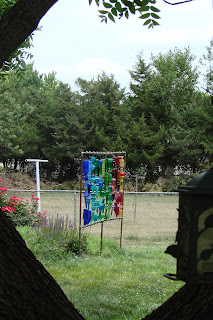 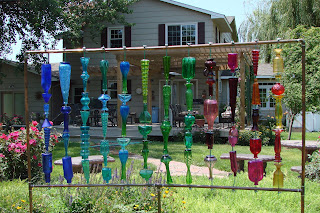